#FixTheCountry conveners have asked the government to take immediate steps to address issues raised by commercial transport operators and their unions.

The call comes in the wake of a nationwide strike by commercial drivers which left thousands of Ghanaians stranded at various bus terminals.

The industrial action is to compel the government to scrap some taxes on fuel such as the Price Stabilisation and Recovery Levy, Special Petroleum Tax, the Energy Recovery Debt Levy and the Sanitation levy to enable price reduction at the pumps.

In a statement dated December 6, 2021, the conveners urged the government to reduce its expenditure in order to lessen the plight of Ghanaians.

“With the effects of Covid-19 on us, we find it insensitive to throw taxes on the poor driver running through their struggles to get sales for their owners. #FixTheCountry supports the call from the Coalition [of Commercial Transport Owners] and hopes that the government works on the concerns of the drivers.

“A meeting on how to resolve the issue which is hinged on the five taxes/levies should be held soon before the movers of our economy grind to a halt. We hope more unions come on board to use their collective effort to engage government on issues that affect their members,” the statement noted.

While commending the drivers for embarking on the strike, #FixTheCountry conveners appealed to the government “to grow some sensitive nerves and repeal the levies and taxes on petroleum products.

“Government should not see itself as always having the power to bulldoze its way through with decisions that affect the already impoverished living conditions of Ghanaians.”

Below is the full statement: 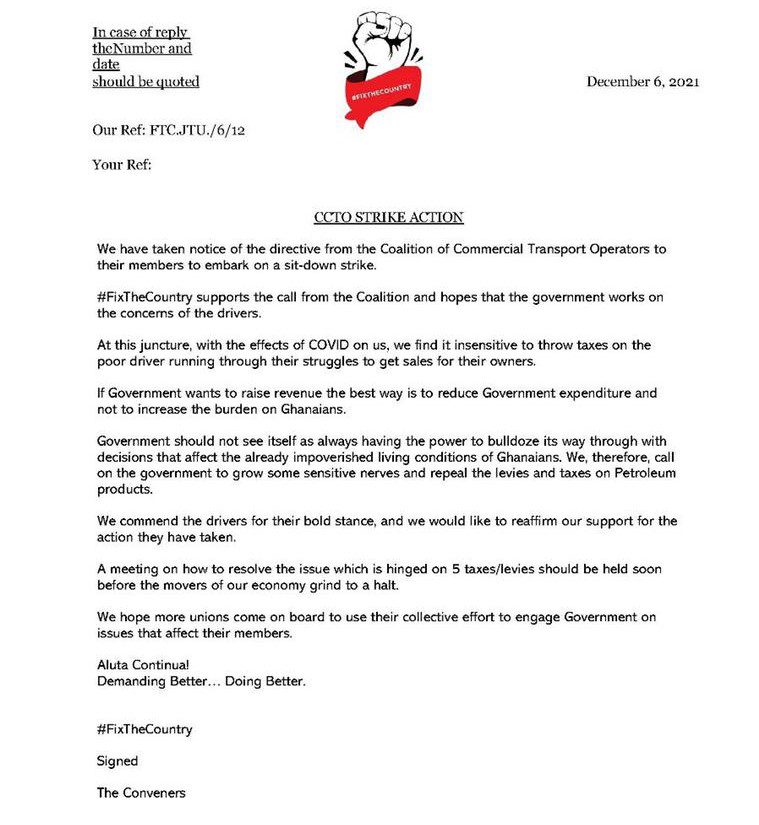 Dampare To Be Finally Sworn In As Substantive IGP Today

Why FDA closed down Shoprite’s meat section at Accra Mall