The Youth Wing of the National Democratic Congress (NDC), has stated emphatically that they will not back down on their quest to embark on the ‘March for Justice’ protest on July 6, although the Ghana Police Service has advised them against it.

The NDC youth’s decision to embark on a protest is to “demand justice for all persons killed and brutalized by state-sponsored thuggery and/or adventurism by Police and Military forces.”

The protest will also demand social justice for the unemployed youth in the country.

The various starting points of the protests are Madina, the Accra business district, Osu and Lapaz.

The supporters will subsequently, meet at the Jubilee House to present a petition to President Akufo-Addo, Inspector-General of Police, James Oppong-Boanuh and Speaker Alban Kingsford Sumana Bagbin.

However, the Ghana Police service on Thursday indicated that it will not be able to offer the NDC youth wing protection for its demonstration as scheduled.

According to the Deputy Commissioner of Police, E.A. Sakyi, the Service is unable to offer security due to restrictions imposed by the Executive Instrument (E. I) 395 to contain the spread of the Covid-19 pandemic that is still in force and Section 4 of the Public Order Act 1994 (ACT 49).

But In a press statement dated July 1, the party’s National Youth Organiser, George Opare Addo stated that the basis for the denial of the protest by the Ghana Police is unfounded. 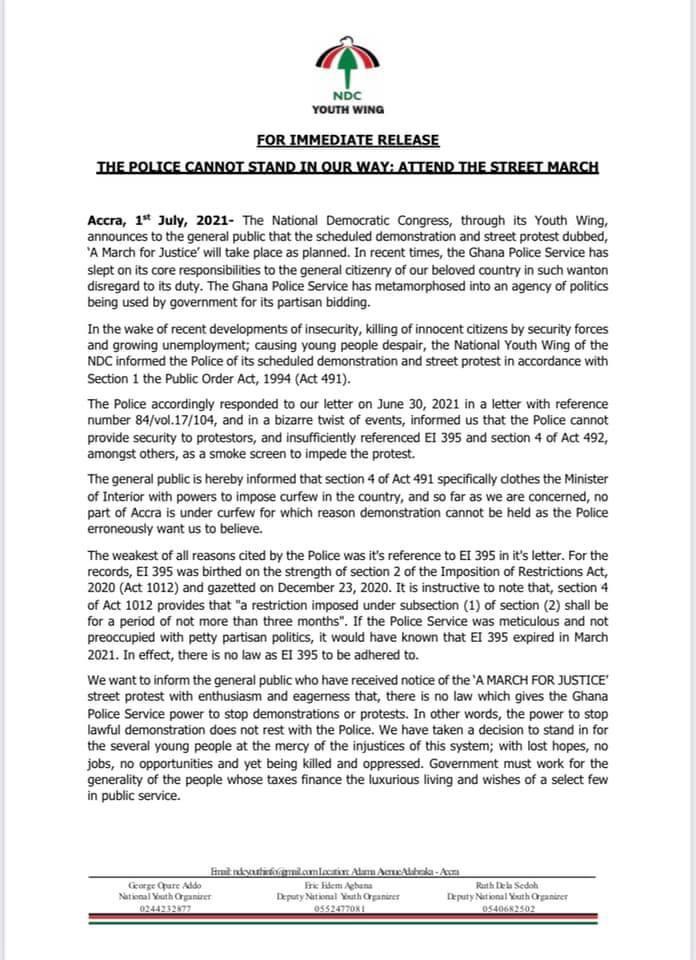 According to him, the imposition of the Covid-19 “restriction has expired in March 2021, adding that there is no law which gives Ghana Police Service power to stop demonstration or protest.

“The weakest of all reasons cited by the police was its reference to EI 395 in its letter. For the records, EI 395 was birthed on the strength of section 2 of the imposition of Restriction Act, 2020 (Act 1012) and gazetted on December 23, 2020. It is instructive to note that, section 4 of the Act 1012 provides that, ‘a restriction imposed under subsection (1) of section (2) shall be preoccupied with pretty partisan politics, it would have known that EI 395 expired in March 2021. In effect, there is no law as EI 395 to be adhered to.”

“The general public is hereby informed that section 4 of Act 491 specifically clothes the Minister of Interior with powers to impose curfew in the country, and so far as we are concerned, no part of Accra is under curfew for which reason demonstration cannot be held as the police erroneously want us to believe,” he stated.