Body of an unidentified man, in his 30s, was found  hanging dead on a teak tree at Atebubu Amanfrom a suburb community of Atebubu Amantin municipality in the  Bono East Region.

It is reported that the body, which was found hanging in the depths of the teak fram , was half decomposed. The locals did not want to open their mouths regarding this matter. 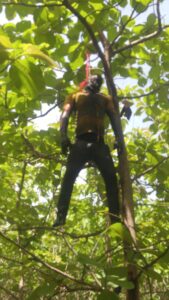 According to the Atebubu Amantin municipal environmental health director Mr Wayo Zakaria, the man is unidentified yet but through physical examination he has been on the tree for about four days . 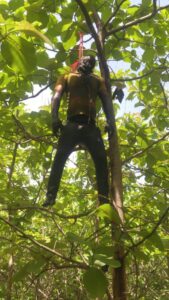 He said they couldn’t identify him because his face was covered with mask which made it difficult for to uncover. The environmental health director stated .

Atebubu Amantin police command reached the spot, recovered the body and sent it to Hospital for autopsy.

Police have started investigating the incident.