At least Four persons have been reported dead with scores injured in a fatal accident at Esuehyia on the Ekumfi-Cape Coast Highway in the Central Region.

The accident, which occurred in the early hours of Tuesday, involved a passenger bus with registration number GT 6472-20 and a tipper truck.

A witness, who spoke to Adom News‘ Kofi Adjei, said the passenger bus was conveying church members from Takoradi to Accra.

The driver, who was suspected to be speeding, crashed into the tipper truck which had been wrongfully parked on the opposite side of the road.
This was in an attempt to avoid a head-on collision with another passenger bus approaching from the opposite direction.

A distress call was placed to the Ghana National Fire Service and the Ambulance Service who rushed to the scene to rescue the victims.
The bus was badly damaged with broken glasses as well as the belongings of passengers scattered around the scene.

The victims have since been conveyed to the Apam Catholic Hospital, Saltpond, and Mankessim for treatment.

A towing car has been dispatched to remove the vehicle to the Esuhenyia Police Station with personnel at the scene to direct traffic. 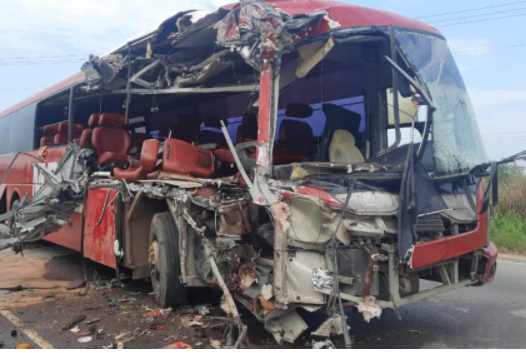