The Ministry of Works and Housing has said it will ensure the completion of work on the abandoned Saglemi housing project started by the previous government.

“The government is committed to continuing the project and seeing to its completion, regardless of the challenges,” the sector Minister, Mr. Francis Asenso-Boakye, said after a tour of some affordable housing sites at Saglemi, Kpone and Tema in the Greater Accra Region yesterday.

He said in spite of the difficulties associated with the project, the government would look for strategic investors to help complete it, including all uncompleted housing projects across the country. 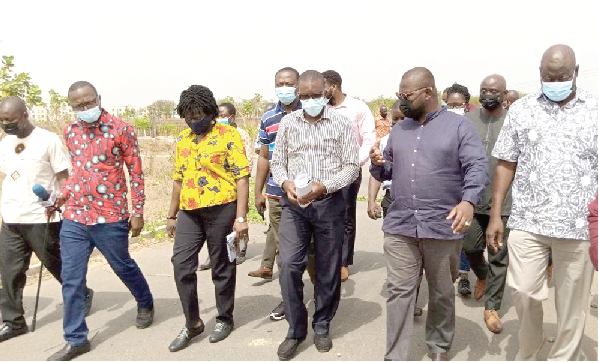 While describing the Saglemi project as a great idea, he said the conception, design and implementation of the project were not well executed, “and that is why we find ourselves in this situation”.

Mr. Asenso-Boakye, however, said he was committed to putting the past behind him and charting a way forward by ensuring the early completion of the project and others across the country through innovative means of raising funds.

The Saglemi housing project was initially planned to deliver 5,000 housing units. However, the scope of works was revised, which has become a subject for police investigation.

The Director of Housing at the Ministry of Works and Housing, Dr. Theresa Tuffour, said out of the 1,502 units at the Saglemi project site, the contractors completed 1,389, pending the installation of utilities.

She said 386 units were at various stages of completion, while 139 town houses had been completed, awaiting the provision of utilities.

The minister said the government’s bid to address the country’s housing deficit, which is around 2 million, would not be attained if such projects were not completed and delivered for occupancy.

At Community 26, Mr. Asenso-Boakye inspected ongoing works on the Kpone affordable housing project which was started by former President John Agyekum Kufuor’s government but was abandoned when the NDC came to power in 2009.

It was later handed over to the Tema Development Company Limited, which is constructing 3,016 apartments, with complementary facilities, such as a school, a police station and a commercial centre.

The General Manager in charge of Operations at the TDCL,  Mr. Samuel  Asante, who briefed the minister, said the project, which would be completed by the end of 2022, would comprise studio apartments, one-bedroom and over 1,376 two-bedroom apartments with social amenities.

He commended the government for prioritising housing in the second tenure of President Nana Addo Dankwa Akufo-Addo’s Presidency, saying that with the necessary support, the TDCL would be able to partner the government to deliver affordable housing for all.