The Ghana Armed Force (GAF), says it will deal with its personnel seen in a viral video brutalizing some residents of Wa, the Upper West Regional capital on Thursday, July 1, 2021.

According to GAF, it has already initiated investigations into the “unprofessional conduct” of the officers.

GAF made this known in a press statement issued today, Friday, July 2, 2021.

The statement said the “unprofessional conduct took place at a time the Commanding Officer of the soldiers and the Chairman of the Regional Security Council, were out of town for an official engagement

“Internal disciplinary measures have been instituted to deal with all those who will be found culpable in this unprofessional conduct by the soldiers.”

The statement also added that the Chief of the Army Staff is leading a “high-powered military delegation” to Wa to engage traditional and opinion leaders to resolve the issue.

It added that the delegation will also find means to assuage the anger of the Wa people.

“In view of the seriousness of the matter, the Chief of the Army Staff is leading a high-powered military delegation to Wa to meet the traditional and opinion leaders to find an amicable way of resolving this unfortunate incident. The delegation will also explore means to assuage the anger of the people and promote good neighborliness.”

Some eyewitnesses who spoke to Citi News said the soldiers claimed they were searching for their stolen mobile phone.

The Public Relations Officer of the Upper West Regional Coordinating Council, Cletus Awuni was also beaten by the officers.

“They hit my head about three times and my back, because they used the taser on my hands and my chest,” PRO told Umaru Sanda on Eyewitness News.

Below is the full statement from GAF 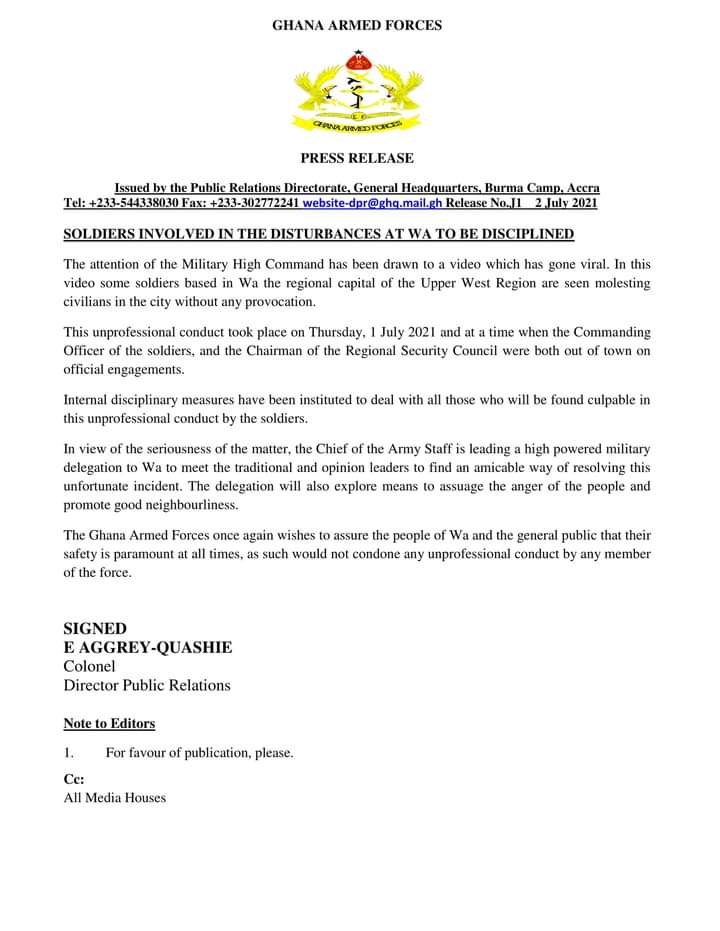 Taxi driver, officer engage in ‘Fast and Furious’ on the streets as driver resists arrest (VIDEO)

Cooking your husband’s food with menstrual blood, it won’t kill him – Lutterodt

Major Mahama’s case: Evidential video to be shown in court on April 12.