An unnamed Ghanaian man flaunted his rich culture as he looks dapper in Kente cloths while exchanging vows with his obroni partner all the way in the United Kingdom.

The smile and sparkle in his eyes alone show how this means so much to him and carving this important day in his life away from Ghana where gays are abhorred and ostracised.

They were also seen kissing in some of the photos we have sampled for you in this report. This development is on the heels of a similar thing that happened in Germany between a Ghanaian man and his German gay partner.

In that particular report, the two were captured in a video we attached walking out of the wedding venue and sharing a kiss before walking majestically to their car as they proceeded to perhaps another venue to continue with the wedding reception.

Meanwhile, lawmakers in Ghana have proposed a bill that would punish displays of same-sex affection and advocacy for LGBTQ rights with up to a decade in prison.

On the list of potential offenses: organizing efforts to support sexual minorities, donating to such causes and posting encouraging messages on social media.

The draft legislation has created a furor in the West African nation, where free speech is protected in the constitution and visitors from socially liberal countries drive the tourism industry.

Let’s now see the photos of this gay man and his UK partner; 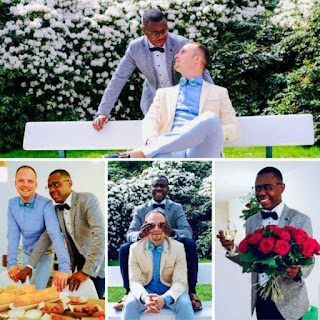 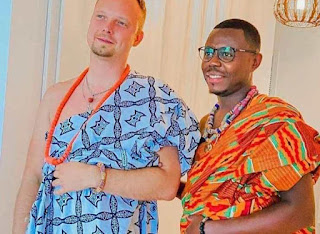