The Greater Accra Police Command has told the opposition National Democratic Congress (NDC), Youth Wing, that it is unable to provide the needed security to enable the group to embark on A March for Justice” demonstration.

The NDC Youth Wing in a letter dated 30th June served notice to the Police of a planned demonstration set for Tuesday, July 06, 2021.

A letter sighted by Kasapafmonline.com addressed to the Inspector General of Police (IGP) and signed by the National Youth Organizer for the NDC, George Opare Addo indicated that the NDC was informing the Police of the demonstration in line with the Public Order Act.

“The protest is to demand justice for all killed and brutalized by State-sponsored thuggery and/or adventurism by the Police and Military forces. It also to seek social justice for the unemployed youth in the country,” he stated.

According to him, the protest will end with a presentation of a petition to President Akufo Addo, the Speaker of Parliament, and the Inspector General of Police.

But the Police in a statement signed by the Greater Accra Regional Police Commander, DCOP, E.A Sakyi explained that its decision is based on the fact that restrictions imposed by the Executive Instrument (E.1) 395 to contain the spread of the COVID-19 pandemic have still not been lifted. 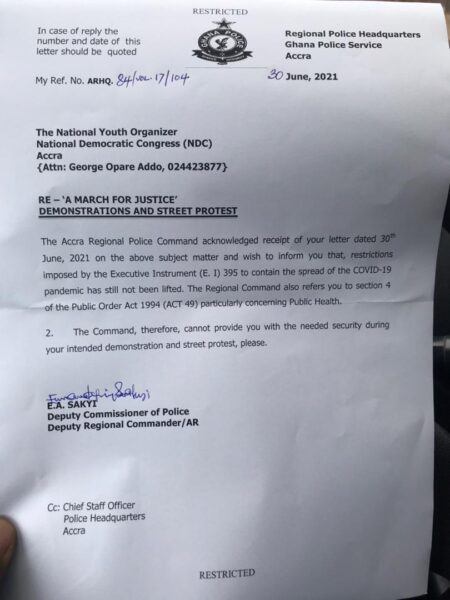 Shatta Wale’s Alleged Cousin ‘Lover’, Threatens To Expose Michy, If She Does Not Reveal Why She Left His House