US First Lady, Melania Trump has referred to new book about her as ‘fiction’ after the writer of the book claimed the first lady had plastic surgery, used her position in the White House to renegotiate a new prenup with Donald Trump, while possessing a written document that says her son, Barron would be treated the same as Trump’s other children. 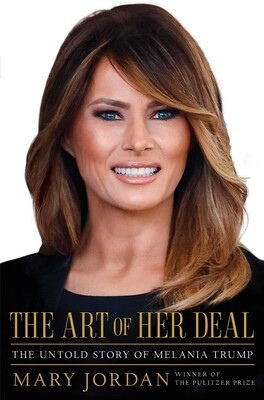 According to the new book ‘The Art of Her Deal: The Untold Story of Melania Trump,’ , the pren-up renegotiation happened in early 2017, when she delayed her move to the White House after Trump won the presidency. It claims she lied about her age and has had plastic surgery.

The book also claims Melania didn’t move into 1600 Pennsylvania Avenue until June 2017 – six months after Trump took the oath of office as she used that time to renegotiate her prenuptial agreement after learning through the media of Trump’s alleged infidelities, allegations he has denied.

The book also claims the incoming first lady wanted Barron to finish out his school year in New York but she also needed time to ‘cool off’ after hearing Infidelity stories about Trump.

The book which will be out on Tuesday was written by Washington Post reporter Mary Jordan, and paints an unprecedented portrait of the first lady’ based on interviews with more than 100 people in five countries.

Excerpts from the 286-page book appeared in The Washington Post on Friday, with the book claiming Melania lied about her age as she and Trump have a much closer age range.

Melania Trump’s office on Friday blasted the book as ‘fiction.’

‘Yet another book about Mrs. Trump with false information and sources. This book belongs in the fiction genre,’ Stephanie Grisham, the first lady’s chief of staff, said in a statement to DailyMail.com.

Akufo-Addo will be one-term president - Lawyer