New York Governor, Andrew Cuomo has officially signed police reform legislation into law, consisting of 10 reform bills in the wake of the nationwide protests following the killing of George Floyd.

The bundle of police reform bills passed by the legislature this week was signed on Friday. Cuomo signed four out of the 10 bills into law, while the other six bills await his signature.

I just signed into law nation-leading legislation that:

There is more to do & NY will lead the way. 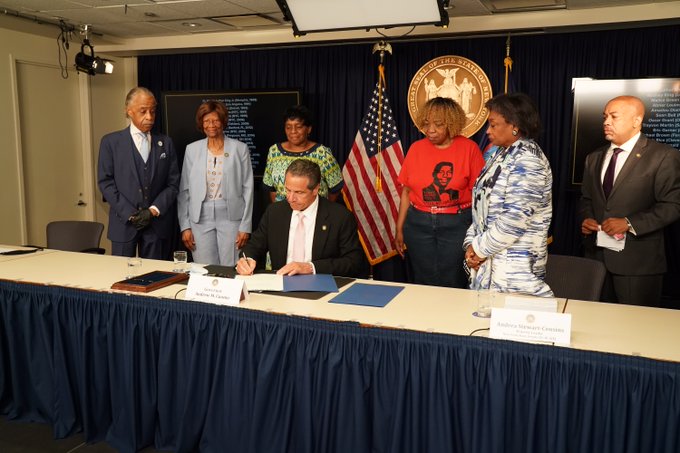 3,207 people are talking about this

The legislative package outlaws police use of chokeholds, requires all state police officers to wear body cameras, and permits the release of disciplinary records for police officers, firefighters, and corrections officers to be released without their written consent.

It also outlaws false race-based 911 calls, a move taken after the highly publicized incident in which a white woman called 911 after a black man, who was birdwatching, requested that she leash her dog.

The chokehold law was named after Eric Garner, the black Staten Island man who died in 2014 while being held in a chokehold by a police officer.

The restraint tactic had already been prohibited by the NYPD, but today’s law makes chokeholds punishable by up to 15 years in prison.

“The truth is this police reform is long overdue and Mr. Floyd’s murder is just the most recent murder,” Cuomo said Friday. “It’s not just about Mr. Floyd’s murder. It’s about being here before, many, many times before.”

Additionally, Cuomo signed an executive order making state funding to police contingent on New York agencies developing a plan by April 1 — to be enacted into law after consultation with the community — to “reinvent and modernize police strategies,” including use of force guidelines.

“We’re not going to fund police agencies in this state that do not look at what has been happening, come to terms with it, and reform themselves,” he said.

The new law, effective immediately, makes disciplinary records subject to Freedom of Information Law requests from journalists and the public, shining a light on the well-guarded files after decades of secrecy.

Melania Trump had plastic surgery, lied about her age, and has 'proof in writing' that her son will be treated equal to Trump's other kids - New book claims

‘It was like a miracle, a beautiful scene' - Trump says when asked about George Floyd protesters getting tear-gassed by National Guard