Tema Police is investigating a case involving a 21-year-old woman who allegedly stabbed his 70-year-old amputated father to death at BBC, suburb of Community 2 in Tema.

The culprit, Daniella Nyarkoh, reportedly slashed her father, lshmael Nyarkoh’s throat with a kitchen knife and also inflicted deep cuts on his head and belly.

She is believed to be mentally unstable even though it has not been confirmed by a psychiatrist.

According to Chief Inspector Stella Dede Dzakpasu, spokeswoman of the Tema Regional Police Command, the suspect is a SHS graduate and lived with her parents and siblings in a single room.

On May 29, 2021, the suspect was sent to a prayer camp at Tema Newtown after her parents detected she was exhibiting ‘strange’ behaviour.

However, the family was advised to send the suspect to a psychiatric hospital for mental examination.

The suspect on the next day, at about 5:15 am, started behaving abnormally and suddenly rushed to the store room to pick two knives to stab her father, who was then lying on the bed, without any provocation.

The Crime Scene Management Team from the Tema Regional Police Command visited the scene and found the body in a pool of blood.

Two kitchen knives were retrieved at the crime scene and the suspect taken into custody.

The body was then conveyed to the Tema General Hospital morgue for autopsy. 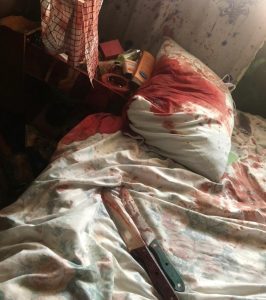