The youth wing of the opposition National Democratic Congress, NDC, says the approval of allowances for the wives of Presidents and Vice Presidents is unconstitutional.

They have thus announced that they will challenge the move at the Supreme Court.

A five-member emolument committee which was set up in June 2019 by President Nana Akufo-Addo among other things recommended the said allowance.

According to the Minister of Information, Kojo Oppong Nkrumah, this recommendation has been approved by Parliament.

He explained that the allowance payment had been done quietly in the past, but the Akufo-Addo government decided to formalise it.

There are reports that, per this policy, the spouses of the two first gentlemen of the state will earn the same salaries as that of cabinet ministers.

This has created a huge public backlash.

The NDC youth wing in a press statement signed by its National Youth Organiser, George Opare Addo, said it won’t allow the recommendation to be implemented.

According to the NDC youth, the move is an attack on the 1992 Constitution, hence their position.

“It is instructive to point out that we find the attempt to institutionalize the payment of salaries to the spouses of the President and the Vice President as an attack on the constitution of the country.”

“The provisions of article 71 of the 1992 Constitution is elaborate and unambiguous by listing the public officials bound to draw their salaries from the Consolidated Fund.”

The NDC youth argue that the Emolument Committee does not have the powers to make the said recommendation, hence must not be adhered to

persons to benefit from the Consolidated fund without due regard to article 108.”

“It is our considered view that the Committee erred in making such recommendation. The bully approval process by the NPP majority in the last Parliament and subsequent acquiescence of President Akufo-Addo of the recommendation is an unjustifiable assault on the Constitution, which must not go unchallenged.”

The NDC youth in the statement said: “In line with this, the Youth Wing will in the coming days invoke the jurisdiction of the Supreme Court to declare this cancerous and insensitive act unconstitutional.” 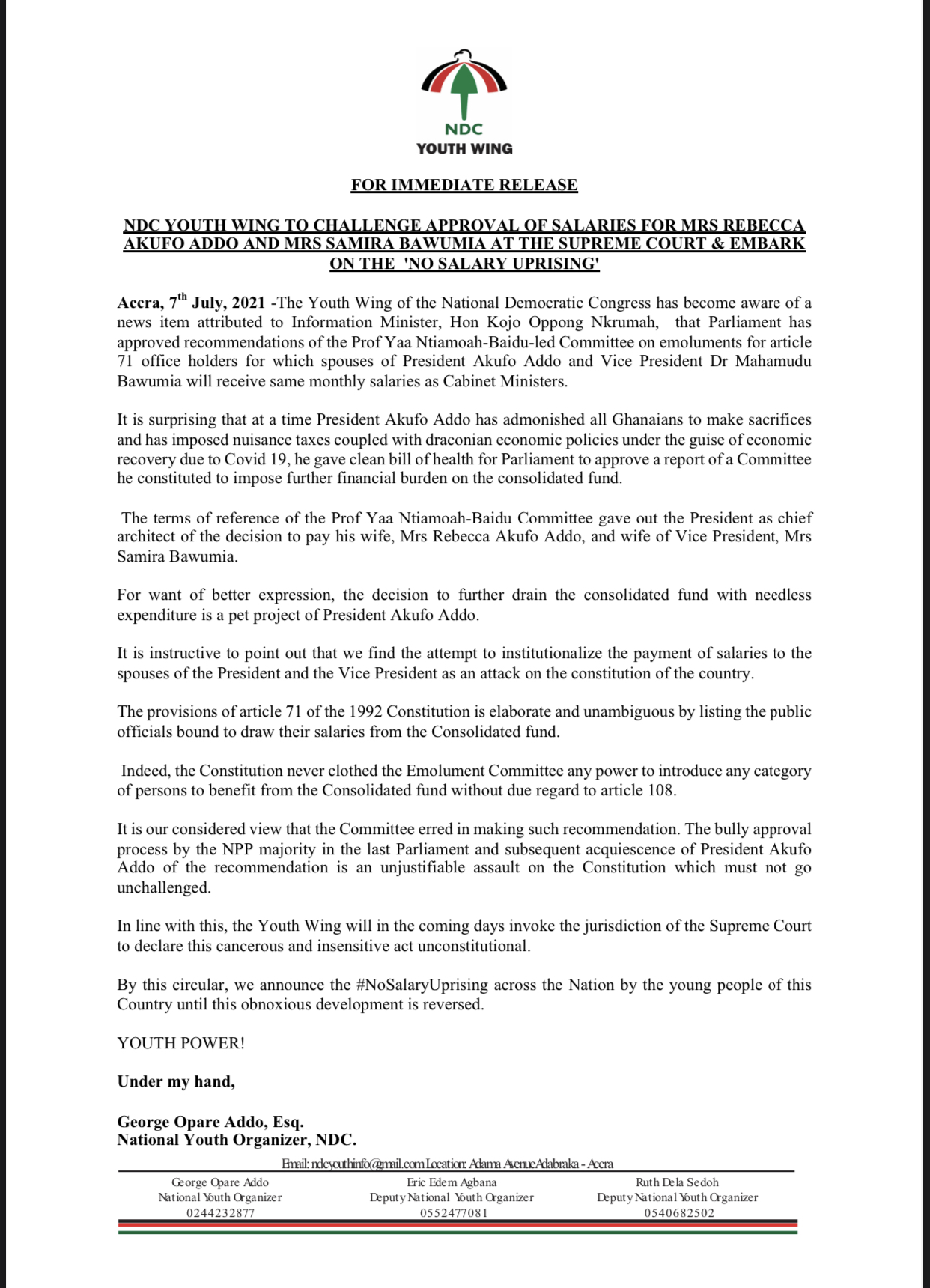 According to him, the allowance payments were instituted under the Kufuor administration.

“President Kufuor, in his wisdom, instituted this because of the bad situations of some spouses of some former heads of states then. President Mills and Mahama even increased the rates of these benefits during their time.”

Silhouette Challenge: Some of you will regret joining it – Comedian Akpororo